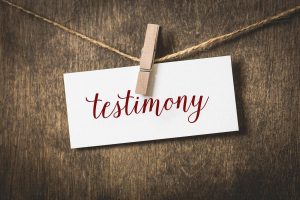 I realized in rebuilding this site that I had never posted my testimony – Kathy had posted her testimony several years ago.

I accepted Jesus Christ as Lord at a church revival in February 1973 at Grace United Methodist Church in Perry, FL. I remember coming to the altar and praying the prayer with Frank Seger, the evangelist who had come to our church. God has had a hold on my life ever since. By the time I graduated high school, I have been active in youth groups and had attended church camp almost every summer and had led Bible studies during breaks on school – suffering mild heckling for being a “Jesus Freak”.

By the time, I graduated high school in 1977, I felt that God had called me into the ministry. My home church even recommended me to be a candidate for ministry but somewhere in the summer before college, things changed. I got sick and then received a USAF scholarship and it was decided to put on hold any further work on going into the ministry.

I strayed as many young people do while in college but always knew that God had me. After graduating and being out on my own, I found a church home again and got involved in youth and young adult ministry – still as a lay person. I had gone on a mission trip to Mexico in 1985 and helped lead a couple of youth mission trips in south Alabama, one to the inner-city of Mobile. These were awesome experiences and mission work became a part of me. Kathy and I married in 1986 and in 1987, we both attended an Emmaus Walk which strengthened both our walk with Jesus and our marriage.

I’m ashamed to say that we left the church twice during the early years of our marriage – we never lost sight of God but became frustrated and disillusioned with the church. We finally came “home” after moving to Dahlonega, GA in 2003. We got involved with the Emmaus community here, working several walks each, we’ve led and participated in several Bible studies and have gone through Elijah House.

In August 2005, I took the Lay Speaking Course of our church, something that I had wanted to do for years. This caused some discussions to happen and I once again was recommended to become a candidate for ministry, slowing working through the process. I knew I was called but wasn’t sure of what the call looked like (and still don’t fully).

In February 2008, I made a trip to Brazil with Rick Bonfim, Brazilian evangelist who lives in Athens, GA. This trip really set the tone for that year. It was a mind-altering, heart-opening experience. I learned to trust God more with my life and Rick prayed over me that I would be a “servant to the nations”. I have struggled with what that means in my life.

After returning and fasting and praying, I made some decisions based on what I heard God saying to me. I planned to return to Brazil in May, talked to my district superintendent about my future, and to take the license to preach course of our church. When I decided to move, God moved fast and furious before me. May of 2008 saw me going to Brazil and license to preach school and also saw me assigned to a church. I had not planned on a “pulpit ministry” but when asked if I’d accept an assignment, I said “Yes” with no hesitation (a lot of fear but no hesitation).

I served as a local pastor for two years – two years of growth and challenge. We felt that God was calling us to work in Brazil and started preparing ourselves for that. I believe God was getting us to simplify our lives for what He had in store. We didn’t raise enough to go into the field, my dad  got sick (ultimately needed a liver transplant and that whole adventure is a miracle and another story in itself) and we left the ministry – not entirely by choice – and moved back to Dahlonega. We’ve been struggling in a lot of areas as we have tried to figure out what God really wanted (and still wants) from us.

God allowed me to go to El Salvador three times – twice with Kathy. Sadly, we have not been able to go back for a few years. My heart is there and I hope to go back again, in God’s timing.

A few years ago, we moved to the Athens area (short answer when people ask why: “God”).  I went back to school at the Athens College of Ministry – taking courses for a certificate in Prayer Leadership (which I still haven’t finished). God has been speaking and I want to be better prepared to hear Him. He’s allowed me to go to Jordan twice (with another trip planned). Still not certain what our future holds, but we are trusting the One who holds our future.