This is basically a talk I gave at Dahlonega United Methodist Church on Sunday night, January 22, 2006: 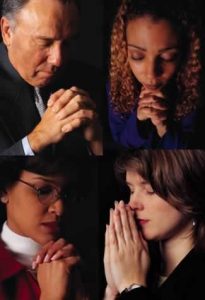 Have you ever thought about these questions? I’m not sure I know all the answers and I’m pretty sure we couldn’t cover all there is to cover in a brief amount of time but these are some of my thoughts and some of the answers we give to those questions:

We pray because Moses, David, Jesus, and others prayed.
Most of our contemporary praise songs are words lifted from the Psalms – many of which are prayers themselves. And the disciples asked Jesus to teach them to pray and he taught them the Lord’s Prayer. An interesting comment:
“A recent government publication on the marketing of cabbage contains, according to one report, 26,941 words. It is noteworthy in this regard that the Gettysburg Address contains a mere 279 words while the Lord’s Prayer comprises but 67.” — Norman R. Augustine
(Note to self: Keep your words few!)

It’s the “Christian” thing to do.
Buddhists, Muslims, and Hindus pray far more than we Western Christians do! Very few seminaries offer courses in prayer, and we aren’t really taught how to pray in church. So, again I ask “why pray?”

We need to communicate to God
Here we start to get to answers that I can relate to and grasp. Note, that I said we need to ”communicate” not “talk”. We have two ears and one mouth; we need to listen as well. Prayer is more than just giving God our laundry list of requests. We need to slow down. William McGill says it this way, “The value of consistent prayer is not that He will hear us, but that we will hear Him.”

We also need a different view point – God’s viewpoint. Kathy and I live in the mountains of north Georgia. About a week ago, we drove up higher into the mountains toward a little town called Suches. We’d had some snow flurries here and wanted to see if there was more snow up the way. The higher up we went the more snow we saw – it was beautiful up in Suches but we couldn’t see much of the valley below. When we caught back to the valley. we couldn’t see the mountains. Communication with God changes our perspective in the same way. What we can’t see from our viewpoint, we can see when God shows us a glimpse of His viewpoint.

Corrie Ten Boom said “Is prayer your steering wheel or your spare tire?”. Sometimes we just rely on prayer when things go bad for us and not as a way of finding out God’s plan for our life.

Others need us to pray
Galatians 6:2 (NIV) says, “Bear one another’s burdens, and so fulfill the law of Christ.” I believe that we are called to pray as much as we are called to evangelize, teach, preach, etc.

Some other verses that bear this out:

In Hebrew, the word paga is generally translated “intercession”; it has other connotations but it also used in context of battle and warfare. Let’s look at that some.

S.D. Gordon, in “Quiet Talk on Prayer” says:
“Prayer is man giving God a footing on the contested territory of this earth. The man in full touch of purpose with God, praying, insistently praying – that man is God’s footing on the enemy’s soil. The man wholly given over to God gives him a new sub-headquarters on the battlefield from which to work out. And the Holy Spirit within that man, on the new spot, will insist on the enemy’s retreat in Jesus the Victor’s name. That is prayer. Shall we not, every one of us, increase God’s footing down upon His prodigal earth?”

Two quotes from John Wesley are relevant here: ”Give me one hundred preachers who fear nothing but sin, and desire nothing but God, and I care not a straw whether they be clergymen or laymen; such alone will shake the gates of hell and set up the kingdom of heaven on earth… God does nothing but in answer to prayer.”

“Bear up the hands that hang down, by faith and prayer; support the tottering knees. Have you any days of fasting and prayer? Storm the throne of grace and persevere therein, and mercy will come down.”

We are called to warfare in our praying!

It is an “ordered” warfare – the battle is already won; the enemy just hasn’t given up and continues to hound the saints with his lies. Ephesians 6:10-20 talks about the armor of God – the armor that is needed for our warfare. I used to say that prayer was the cloak that finishes out the armor and I still feel that is partially true but prayer is also the reason for the armor – prayer is the battlefield on which we fight the good fight.

When you enter into a battle, you study the enemy; you study his strengths and weaknesses and you study how he operates. Our enemy has three basic tactics: lie, cheat and steal. We can borrow from these tactics in our fight:

A final quote, from Charles Baudelaire, “The man who says his evening prayer is a captain posting his sentinels. He can sleep.”